I ran a seminar on the Bible at a recent conference and took with me a glass bowl in which I placed pieces of paper with individual verses from the Bible written on them. I asked each person to take one and that could be an “inspirational word” for them that day. A couple of people were quite encouraged by what their piece of paper said. Most were simply bemused; some even amused. Verses like “He fled naked, leaving his garment behind” (Mark 14:52), “I wish they would castrate themselves” (Galatians 5:12), “Jahaz, Kedemoth, Mephaath” (Joshua 13:18), or even just “He said” (Job 3:2) don’t exactly lend themselves to being emblazoned on inspirational posters.

My point was not to denigrate the Bible. I love the Bible. I have devoted my life to teaching it. But my point is that many Christians treat the Bible as if it is a kind of “promise box” which contains these individual nuggets of wisdom and inspiration called “verses.” We treat it quite flatly, as if each one of them should work in exactly the same way. No wonder so many of us struggle to read it! And no wonder our society sometimes ridicules Christians for following it if we have given the message that that is what the Bible is and how it works. Because it is impossible to read the Bible that way, and I would suggest it is impossible to live in response to the Bible if we are attempting to live out of that metaphor.

For starters, the Bible isn’t made up of verses. It is made up of books (and letters and collections of poems and laws and more.) Books are written as wholes and designed to be read as wholes. Imagine taking To Kill A Mockingbird or A Tale of Two Cities and cutting them into individual one-line pieces and expecting them to impact you in the same way the whole book does. Books just don’t work that way.

The verse numbers we are familiar with were first included in translations of the Bible in the 1550s. And they are very helpful! If we want to study or discuss the Bible in community, it works really well in our literate culture to be able to look up a numerical reference to make sure we are all on the same page. But they were never designed to completely change the way we think about what the Bible is.

So what is a better operating metaphor for the Bible? As a collection of books spanning a variety of types of literature and historical periods, the metaphor that I find resonates well is that of story. The Bible is God’s story; a story in which we are invited to participate. Individual parts of the Bible contribute to that overarching story in a variety of ways. The historical books tell us about the God who made Himself known to different people in different times and places and through them we learn about the God who makes himself known to us in our time and place. The prophets and poets proclaim the words God spoke to His people and the words they spoke to Him and through them we can hear and speak in similar ways. The Gospels reveal to us Jesus Christ: who He is, how He speaks into the world, and His saving death and redemptive resurrection. The letters of the early church reveal the way people applied their faith in Jesus to the realities of their lives and again enable us to do likewise.

One of the dangers of using “story” as our metaphor for the Bible is that sometimes people hear the word story and immediately think fiction. That is not at all how I am using the word. One of my favourite things to do is listen to other people’s stories and share my story and see how they interact. These are not fictional! Rather, telling our stories is the way we relate and engage in community. We live out of stories. And so I love the picture that God invites us to live out of His story.

NT Wright does a much better job of explaining this metaphor than I ever could. He speaks of the Bible as an unfinished drama, one in which we are given the first few acts and the concluding scenes but invited to improvise our own part. This article on the authority of the Bible, and particularly the section on Authority of a Story, is well worth a read if you want to pursue this idea.

But I’ll conclude with another picture. Last year I had the opportunity to visit a church in a Northern Territory Aboriginal community. An indigenous artist has drawn nine paintings which together tell the story of the Bible. They hang on the walls of the church to be “read,” much like the original purpose of the stained glass windows in many European cathedrals. And when the community of God’s people gather in that place, they are literally gathered  within God’s story. That is another metaphor that really resonates for me. The church is constituted in the midst of God’s story. The Bible is not a collection of verses we can pull out as daily motivational sayings, nor wield as weapons in some kind of war. It is the story which gives us life as God’s people and it continually invites us to enter into and embrace the part our own stories can play in His. 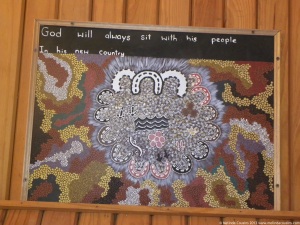 5 thoughts on “A Better Metaphor for the Bible?”