I’m aware my Monday travel posts can get a little bit “gushy” as I talk about places I’ve visited and what I loved about them. Today is not going to be like that. Because to be honest, I really didn’t like Las Vegas. I’m sure it’s different for those who live there, but in terms of the ‘tourist’ centre, the Strip, I found it a difficult place to be, and I’m not sure I’d ever really want to return. 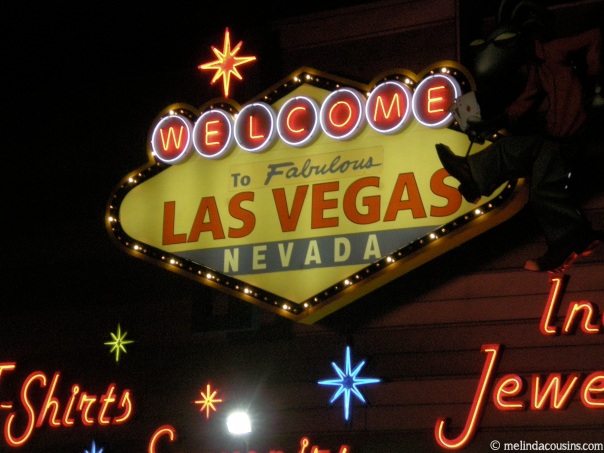 But I had an experience there that I sometimes think about, perhaps because of its unexpectedness in that place, or because of the stark juxtaposition between the images Las Vegas conjures up for many people and the strongest image I took away from the place. Revisiting that experience challenges me about the way I live in and respond to this world, a challenge that I think I need to reminded of today.

I hadn’t really planned on visiting Vegas, but I went there on my way to the Grand Canyon. I know many other people love it so I figured I should spend the weekend there and see what all the fuss was about.

It was the middle of winter and so it was freezing outside. But that doesn’t matter in Las Vegas. You can pretty much make your way from one end of the four mile long Strip to the other and back again without ever having to step outside, and that’s what most people do. From brightly lit casino to brightly lit casino, with shows and bars and zoos and buffets and hotels lining your path. You are totally unaware of whether it is light or dark outside, cold or warm. Time becomes irrelevant. There is constant noise and movement and entertainment and lights and money and food and excess . And it made me feel, for the first time in my life … claustrophobic. I was desperate for some fresh air, and it was like a maze trying to find a way out into it.

When I got out onto the street, things could not have been more different. Hardly any people around, as it was cold and getting dark even though I think it was mid afternoon. Who I remember seeing on the street were two different kinds of men. First, there were those flicking their little cards advertising ‘escorts’ at you as you walked by. Second, there were those begging for money. I walked outside down the Strip in Las Vegas that day, and I found myself crying. I’ve been to villages in Africa and Asia where people have literally nothing, and yet this felt to me like the saddest place in the world.

I went to get dinner at a Chinese takeaway. After getting my plate of food, I was still feeling stifled, so I went to the tables outside. No other patrons were crazy enough to be out there eating in that cold! As I sat down at the table, a man came up and began to go through the garbage bin nearby looking for food scraps. I didn’t think about it, I didn’t question it. It was somehow instinctive and perhaps even involuntary. I just got up, walked over to him, pointed him to my full plate on the table, and walked away. And that is my abiding memory of Las Vegas.

That’s what I learned from Las Vegas, and why I sometimes wonder if I need to go back there. Somehow what I saw and felt there led to this completely spontaneous and natural act of compassion, and it has stuck in my mind ever since. Because to be honest, that’s not normally how I respond to situations like that.  I tend to analyse everything (some would say over analyse!) I’m the person who passes the beggar on the street and then thinks, “I could have helped them. Should I? Can I go back and give them something? What do I have? How much is right? What if they use it for the ‘wrong’ kinds of things? Is it better to try and fix the systemic issues rather than give money to an individual?” For many years those questions would paralyse me, or I wouldn’t even think of them until it was too late. As I get older, I’m learning to go back quicker, to turn around when I get the first thoughts of “I could have done something to help.” But it’s still not always the case for me that a compassionate act just comes so automatically and spontaneously. So why did it happen that way in Las Vegas?

Perhaps it was the stark contrast between money being thrown away at the gambling tables and people rummaging through garbage bins for food. Perhaps it was the subtle sense of people being bought and sold on the street. Perhaps it was seeing so clearly the excess with which some of us in the world live (myself included) side by side with the reality of poverty that many more face every day. Perhaps it was realising that all the glitz and the glamour I saw there, as displayed in these photos, is a façade. What might look impressive is not actually real.

Whatever it was, sometimes when I find myself caught up in the materialism and consumerism and selfishness of my world, I think maybe I need to go back to that moment in a freezing Las Vegas fast food courtyard, and to look the ugly contrast directly in the face again, and so to hopefully be moved with compassion to take some small act to make a difference, even if it’s just for one person in one moment.