I wrote this from 35,000 feet as I made my way from Adelaide to Sydney (even though it’s taken me another day to access the internet to publish it!) Unlike many people, I actually quite enjoy flying. I love going on adventures, and so heading to the airport always makes me quite happy because it usually means I am embarking on another journey full of possibilities.

But it’s more than that. I quite enjoy the actual experience of flying. People who fly a lot think that it’s just the novelty that makes you enjoy it, but  with 15 international trips (106 separate flights!) in the last ten years, and about 50 domestic flights in the last 5 years, I think I qualify as something more than a naïve novice.

I even quite like airports. They are such a fascinating place for people watching, and some of the big ones around the world have plenty of things to keep you busy – I’ve enjoyed the swimming pool at Changi, wonderfully relaxing massages in Bangkok, and a nice retreat in the chapel in Athens.

What do I love about flying?

Basically, I remain impressed by the modern day miracle of flight. People have given me the logical, scientific explanations for how planes can fly, but really, I just think it’s pretty amazing. 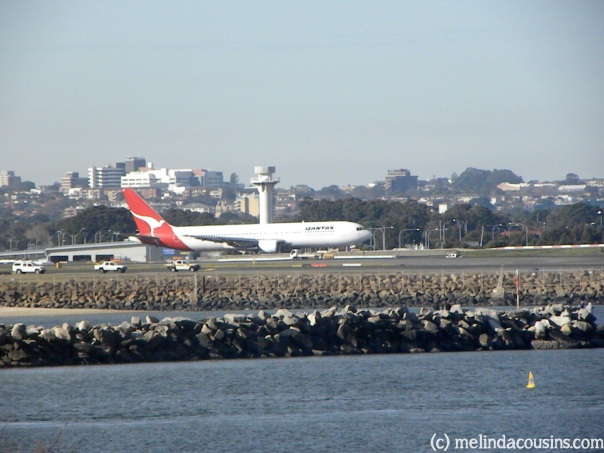 I also quite like the fact that once you’re on a plane you are pretty much cut of from the world, forced to take a break. If I do try to read a book or do some work, I’m always amazed at how much I can get done, even in a short flight. And of course, a good in-flight entertainment system is a nice excuse to catch up on all the movies I might have missed.

And I love looking down and seeing the earth from far above – getting a sense of the scale of this world, its diverse contours and similarities all over the globe, its incredible beauty.

What have I learned from flying?

I think spending all that time cramped in with other people helps your skills in reading people – assessing when someone wants to chat and when they want to be left alone … and when they just want you to get out of their way! (I still think flying can sometimes bring out the worst in people!)

I’m also reminded when flying that we do not live in a class-less society. That little curtain might seem flimsy, but it’s a large social barrier. I’ve never paid to fly business class, although I have been fortunate to receive a few upgrades on international flights (never asked for, and always on the shorter leg of a two-leg journey). It’s a whole other world up there, and while it’s nice to see how the other half lives, there’s a kind of pride in toughing it out with the real world back in economy (which, let’s face it, really isn’t that tough!)

My only real struggle with flying is my inability to sleep on planes, meaning when I get off a long haul flight, I need to go to bed no matter what time of day it is. But as long as you plan to enjoy the flight, it’s not hard to do. I have written previously about how flying can sometimes bring out the worst in human behaviour, but when I allow myself to appreciate it for what it is, the opposite can in fact be true.

Of course, as I write this, Malaysian Airlines flight 370 has been missing for over a week. When a plane vanishes or crashes it captures world attention, and it must be awful for friends and family of those on board. Thinking about the possibilities of what could have happened, and particularly the fact that none of the passengers made contact, is scary. Hopefully we will soon know what has happened and if possible how it can be avoided in future, though that will not bring comfort to those who have lost a loved one.

But it doesn’t seem to have stopped anyone from flying. Perhaps because it is statistically far safer than driving, which we do every day without a second thought. Obviously we have come to rely on the convenience. But more than that, for me at least, there is something special, almost magical, about the fact that we human beings can soar through the air, and I hope I never stop being impressed and delighted by the wonder that I live in a time where this is possible.