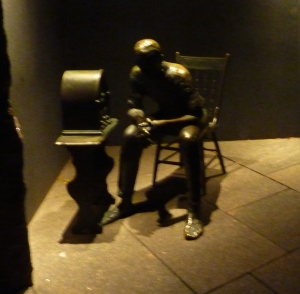 There has been so much going on in the world over the last few weeks. Gaza. Israel. Ukraine. MH 17. Iraq. Syria. Nigeria. Nauru. I’ve found myself in the paradoxical position of feeling lost for words … and yet wanting to say so much.

But when I scroll through my facebook or twitter feeds I see link after link to articles and opinion pieces and blog posts. So much virtual ink being spilled. So many words. So many people speaking.

It makes me wonder.

Certainly not the people commenting on many of the opinion pieces or blog posts I have read. Mostly they seem to be talking past each other, in a hurry to accuse each other of being on the wrong side, or of saying or thinking the wrong thing.

So many strong opinions. So many assumptions that one comment made implies a whole host of other opinions and positions. So many implications that there are only two sides to an issue and one is completely right and the other completely wrong. So many black and white pronouncements. So many accusations.

Yes, I have informed opinions about what is going on in Gaza. Yes, I have strong feelings about what is happening to the Christians in Iraq and how it is (or isn’t) being portrayed in the mainstream media. Yes, I have thoughts about the shooting down of MH 17 and how our country has responded to it. Yes, I have passions about how the Australian government is talking about and treating refugees arriving by boat. Yes, I am still concerned about the missing kidnapped girls in Nigeria and violence against women everywhere. Yes, I could go on.

But before I say another word about them, I have two questions. One is for you and the other is for me.

First, to you. Would you listen? Would you really listen to me? Or would you use what I said to judge me and pigeonhole me and decide whether I am on “your side” of an issue or not? Would I simply confirm what you already think, or lead you to dismiss my thought processes because you have already decided you disagree with my conclusion? Is there any chance that something I say could change how you think about these situations? Because if there isn’t, you cannot hear me.

Second, to me. Have I really listened? Before I speak, have I taken every opportunity to really hear those who are directly affected by the situations the rest of us are opining about? Because I fear that what I see too often is people like me, people in comfortable, wealthy, educated, privileged positions, pontificating about situations in which real people are suffering. How many of them have I listened to? I mean really listened to. How many of them have I greeted by name, sat down with, and genuinely sought to hear?

I was wondering the other day how different the internet would be if there was a rule that you could only write a blog post or an opinion piece about a situation in the world if you were actually on a first name basis with a real person living in that situation and had listened to what they have to say. No doubt that’s an idealistic, unworkable idea, but it’s one that challenges me and keeps me asking questions rather than making statements.

The apostle James spoke these words of wisdom nearly two thousand years ago.

“My dear brothers and sisters, take note of this: Everyone should be quick to listen, slow to speak, and slow to become angry.”

What would it look like for us to listen, really listen, to these words in the way we respond to the crises around our world? Do you think perhaps it could somehow make a difference?