This weekend I noticed that my favourite local dumpling place, just around the corner, has closed down. There are plenty of other dumplings available nearby (I do live two blocks from Chinatown after all), but it’s not just the taste I will miss, but the staff I have come to know from being a ‘regular’ at my ‘local’.  It was one of the first places I discovered which helped me articulate a real sense of neighbourhood in the midst of the city.

It was my enjoyment of travelling to various cities around the world that prompted me to move into the city in my hometown. I love city living – the vibe and the variety, the hustle and bustle, the joy of walking and watching. But mostly, I love the diversity of people and the sense of neighbourhood community that I’m discovering can be found in the city.  So today I’m thinking it would be interesting to revisit one of the world’s most populous cities, Shanghai. With just over 24 million people, this city has around the same population as the nation of Australia in an area about twice the size of Adelaide.

What did I love about Shanghai?

The sheer size of the city is a sight to behold,  best appreciated by visiting the scale model found at the Urban Planning Exhibition Centre.

Within this huge footprint is a huge diversity of neighbourhoods. From the Old Town artisans …

… to the Beaux Arts buildings lining the Bund … 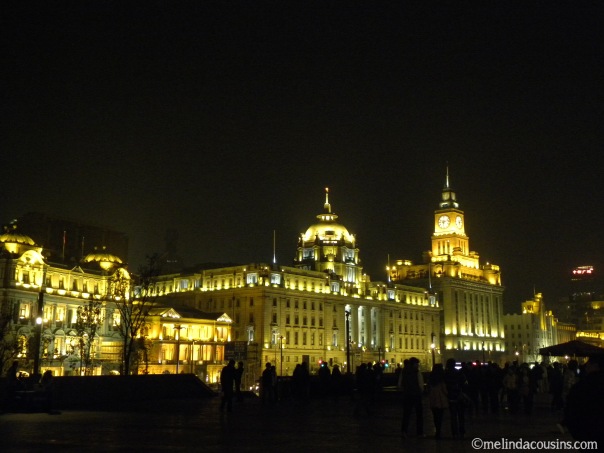 … to the modern skyline of the financial district. 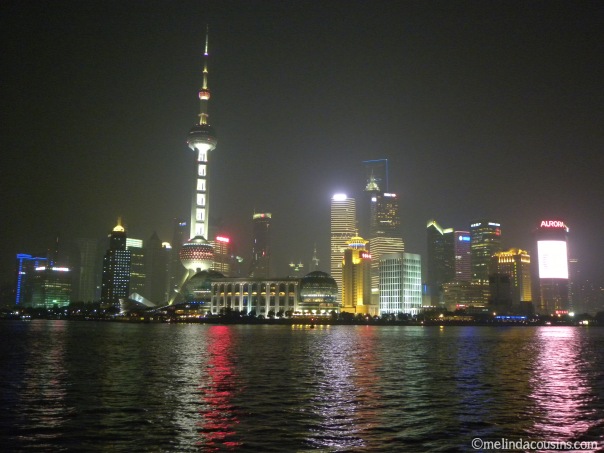 As well as one of the largest populations in the world, 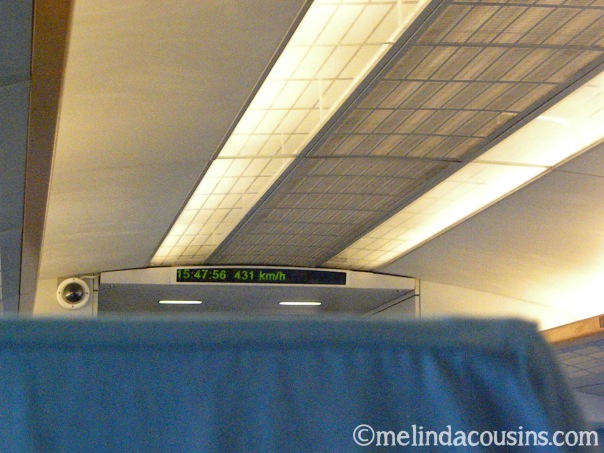 celebrating the nation’s art and history.

It is also home to perhaps the most surreal tourist attraction I have ever visited in the Bund Sightseeing Tunnel, which despite its name is a tunnel under the river with psychedelic lights, trippy music, and bizarrely poetic random phrases read throughout the journey.

And when it comes to dumplings, I’d stand by the claim of those I had in YuYuan to be up there with the best in the world.

What did I learn from Shanghai?

With all these ‘best’ and ‘biggest’ things to see and do, what I appreciated most about Shanghai was the interactions with people. Walking along the Bund is perfectly suited for ‘people watching’, but it was also while there that I met and interacted with people from six or seven different countries, with locals as well as visitors.

I don’t know whether it is the closer proximity of city dwelling,  the fact that they are by nature less homogenous than other locations, or the fear of getting lost in the crowd, but I find that in the city there is often a greater willingness of people to at least smile, if not engage, and seek out some sense of community and connection. 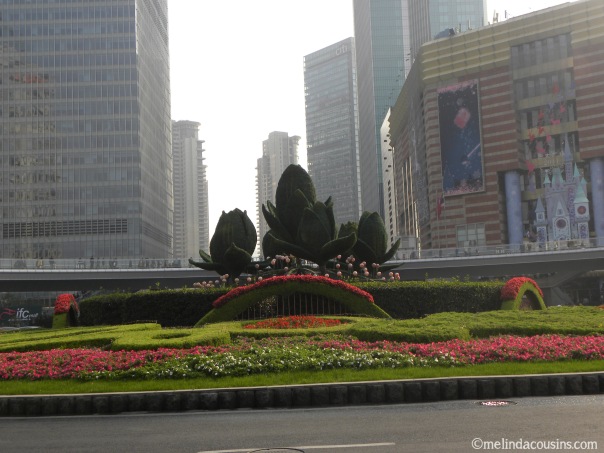 As I seek to connect with my neighbourhood community in the city where I live, as I try to overcome the temptation to be anonymous and instead choose the simple, deliberate gestures of eye contact and a smile, perhaps leading to a friendly word or willingness to engage, I’m challenged by how I can play my own small part in making city life the best it can be not just for me, but for those around me.

Just a quick post today. I’ve been thinking a lot lately about the debate in my country about asylum seekers and refugees, the way our government has chosen to respond to them, and the options available to people who disagree to speak truth and advocate justice. I hope to post more about that in the future. For now, I’m turning my travel reflections this week to the place from which many of those asylum seekers board the boats that ultimately lead them to our detention centres, one of Australia’s closest neighbours, and a country I think we often misunderstand, Indonesia.

I haven’t done the standard Aussie tourist trip to Bali, but alongside some off-the-beaten-track places, I have spent a little bit of time in Indonesia’s capital, and I can definitely say like nearly everywhere else I’ve visited, Jakarta is a place I both enjoyed and learned from.

What did I love about Jakarta?

Like any capital city, the public buildings tell some of the story of the nation’s history and politics.

And the view from the top gives you just a tiny glimpse into what a city of 28 million people looks like.

The President’s Palace is somewhat reminiscent of the White House.

While the Supreme Court building would be at home in many places around the world.

Above all, I loved the food. Fresh, fast, cheap, spicy, diverse, delicious.

What did I learn from Jakarta?

Like many places, Jakarta is a city of contrasts, with areas of great poverty in the midst of the high-rise city towers. I was reminded of the challenge all countries face to provide justice and equity, and in particular to remember the least among us.

I appreciated visiting the huge mosque, which can accommodate 120,000 men praying simultaneously, and learning more of the influence religious affiliation has on life in Indonesia. I did get myself in a little trouble when I went to follow my (male) friend in signing the guest book, only to be given a sharp rebuke – not for you!

But mostly I learned from the people. They were so friendly and welcoming, with such a positive attitude towards me as an Australian (although this was prior to the diplomatic tensions of the last couple of years). I was often “mobbed” on the street by groups of young women wanting to practice their English.

I’ve said it before, and the more I travel the world, the more I am sure I will say it again. People are people everywhere. We like to think that it is so difficult to understand one another, and certainly on the level of politics and culture it can be. But when we take time to have a conversation and share something of our lives with another person, I am always amazed anew at how what divides us is superficial, and what unites us – our hopes, dreams, loves, laughters – is so much deeper. We are need to be challenged to take time to learn from those who seem different to us, and to learn how much we truly share.

I would have to say Almaty, Kazakhstan felt like one of the most incongruous or diverse places I have visited. So many aspects of the place felt familiar, but from other places all over the world … and yet when you put it all together, it is an incredibly unique place.

The red-dust-edged roads between the city and the villages reminded me of driving through country Australia … although the transport looked more like rural China.

The apartment blocks in the city reminded me of former communist East Berlin (and the bureaucracy certainly had that Iron Curtain feel!)

The snow-capped mountains covered in fir trees could have been in Canada or Switzerland.

The crazy traffic reminded me of both Cairo and Bangkok. 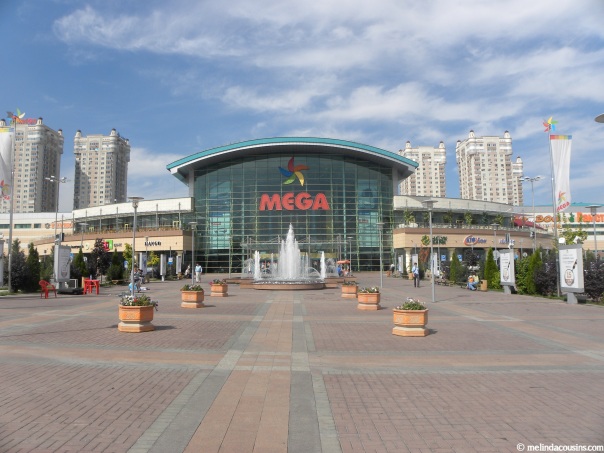 … while the village food markets were more reminiscent of Africa. 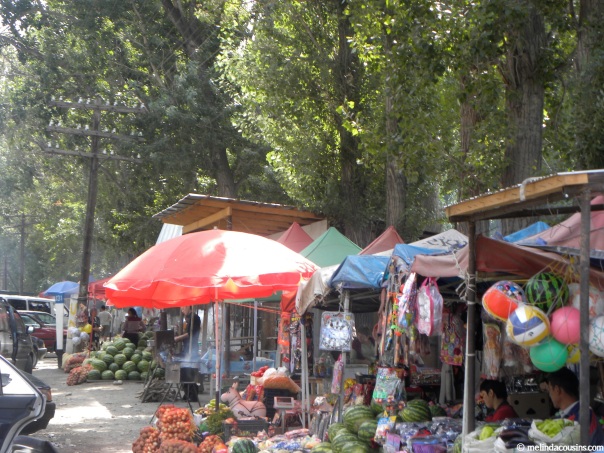 The light displays and fountains in President’s Park could have been in many US cities. 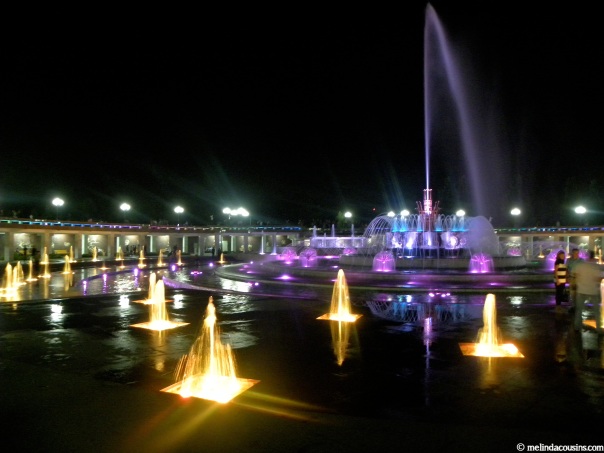 … while the village mosques were similar to those I saw in Indonesia.

It can be difficult to know whether you are in Asia, Eastern Europe, the West, or the Middle East!

All this is not to criticise! I loved my time in Almaty and think it is a fascinating place, with some amazingly friendly and hospitable people. I particularly loved looking down on the city at night from the mountains above.

I also loved that pretty much any car is a “taxi”, and I really enjoyed the local shasliks, where there was certainly no skimping on the meat! 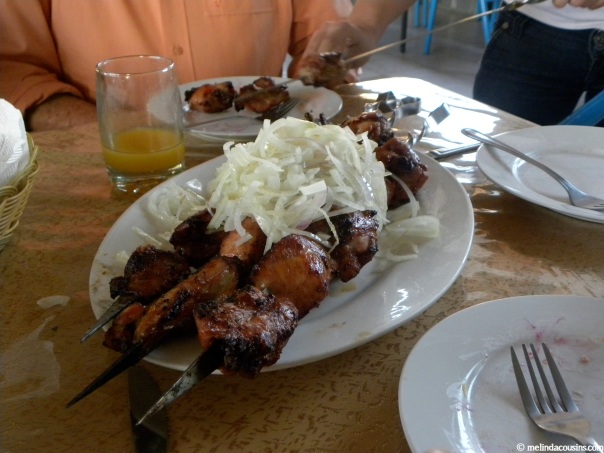 So, what did I learn from Almaty?

Formerly part of the USSR, the Kazakh people are reclaiming their identity along with their independence, but this makes for lots of challenges in a population made up of two different ethnicities with different languages, cultures, religions, values and dreams. It’s not always easy negotiating the history of past hurt and the competing current agendas.

But they are giving it a go and learning along the way, and while it can be easy for outsiders to criticize, I actually think we have much to learn. I live in a country that claims to be “multicultural” but has not really come to terms with many of these issues and challenges. The diversity I saw in Almaty certainly challenged my thinking about what it might look like to embrace and accept differences. And the hopes of people for justice and peace and significance are the same hopes of people the world over. We are all so very different … and yet so much the same.